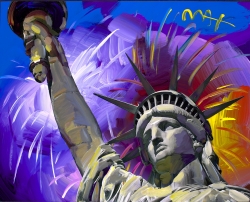 Stone Harbor, NJ, June 20, 2017 –(PR.com)– When Peter Max returns to Ocean Galleries (9618 Third Avenue, Stone Harbor/609.368.7777) over the Fourth of July weekend, he will be celebrating two occasions that are deeply meaningful to him: America’s independence and the fiftieth anniversary of the “Summer of Love.”

The “Peter Max – Summer of Love 50th Anniversary” exhibit will be at Ocean Galleries from Friday, June 30 through Wednesday, July 5, 2017, and will include a new collection of signature artwork with paintings ranging from his colorful, iconic, cosmic works, to classic imagery from his illustrious five-decade career.

For the past five decades, Peter Max’s art has been part of the fabric of American pop culture and he continues to paint bold and lively artwork for important projects and events. In addition to his numerous museum and gallery exhibitions, Max has created artwork for projects including a giant Moscow Music Peace Festival stage, a six-hundred-foot-long Woodstock ’99 Music Festival stage, a two-hundred-fifty-foot-long billboard flanking the U.S. Pavilion at the World’s Fair in Seville, Spain, the hull of a giant Norwegian Lines cruise ship, and Dale Earnhardt’s NASCAR race car. Max has been official artist for six GRAMMY Awards, five Super Bowls, the NHL All-Star Game, the 2000 World Series, the 2000 Kentucky Derby, the U.S. Winter Olympics, World Cup USA, the Indy 500, the Rock and Roll Hall of Fame, and many other notable events in sports and music. Max’s portraits have honored U.S. Presidents, foreign dignitaries, rock stars and jazz musicians, movie stars and sports icons.

In May of 2017, Max collaborated with Wrangler in celebration of their seventieth anniversary as well as the fiftieth anniversary of the “Summer of Love.” Max first collaborated with Wrangler in the early '70s on a clothing collection that featured bold, colorful pieces, including jeans, western shirts and jackets, printed sweats and tees shirts, all with packaging and tags designed by the artist in his iconic, cosmic style that celebrated the energetic youth movement of the era.

This year, the United States Tennis Association (USTA) called on Peter Max to create the 2017 U.S. Open theme art, which celebrates the twentieth anniversary of the Arthur Ashe Stadium. The artwork was unveiled at Peter’s studio in New York City on June 14, 2017. Max was also commissioned to create the U.S. Open theme art in 1997, which featured the Arthur Ashe Stadium for the first time.

Peter Max has a long and impressive history celebrating the Fourth of July and painting the Statue of Liberty, including working as an artist and activist to raise funds for its restoration. He was part of the U.S. Bicentennial celebration in 1976, when the King of Sweden presented the book, Peter Max Paints America, to President Gerald Ford and incoming president Jimmy Carter at the White House. At the request of First Lady Nancy Reagan, he attended another White House Fourth of July celebration in 1981 to commemorate President Ronald Reagan’s first year in office, creating six 8-feet tall Statue of Liberty paintings in the White House Rose Garden and marking his sixth year of the “Liberty” painting tradition. He helped ring in the millennium with OpSail (Operation Sail) 2000, joining President Bill Clinton in celebrating with the largest peacetime assembly of ships in New York harbor’s history.

“It has been a great privilege to have participated in Fourth of July celebrations,” says Max. “They have been great celebrations of the freedom and equality that has made America the most creative and democratic country on Earth.” In the past 20 years, Ocean Galleries has had the honor of hosting Peter Max for exhibitions in conjunction with the Fourth of July numerous times. In fact, many of Peter’s collectors and fans look forward to the exhibition in Stone Harbor and have come to associate the holiday with Max.

Another important celebration to Max was the “Summer of Love” in 1967, when nearly 100,000 young people gathered in San Francisco’s Haight-Ashbury neighborhood to celebrate their own music, art, peace and freedom. Max's vibrant, cosmic images captured the spirit of the '60s youth movement, and was cited as “the visual counterpart to the music of the Beatles.”

"Throughout this wonderful period, I was consumed by the idea of innocence as well as transcendence. My cosmic art subjects were always euphoric…My inspiration came from the new youth movement in America and in return spoke to it," said Max.

Whether ringing in another Fourth of July or celebrating at iconic events such as the “Summer of Love” and Woodstock, Max’s artwork and enthusiasm have remained unsurpassed and relevant to the times.

In addition to an extraordinary collection of artwork and custom-framing, Ocean Galleries also offers a variety of hand-made crafts from local, regional, and national artists in America, such as glass, pottery, jewelry, and furniture. All summer exhibitions take place at the Stone Harbor location of Ocean Galleries (9618 Third Avenue), which is open from 10:00 AM until 10:00 PM daily throughout the summer season. The Avalon, NJ location of Ocean Galleries (2199 Ocean Drive) is open daily from 9:00 AM until 5:00 PM. For more information, call 609-368-7777 or visit oceangalleries.com 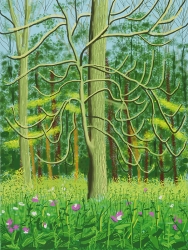